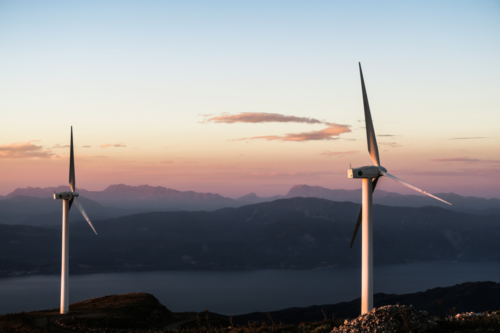 Torn rotor blades, shredded wings, burning nacelles – a lightning strike can mean a spectacular end for a wind turbine. The Fraunhofer Institute for Wind Energy and Energy System Technology (IWES, formerly: ISET) recorded a total of 1155 lightning damage in the wind turbines recorded between 1992 and 2005, after which the bikes stood still for an average of 35 hours. At the beginning of 2007, the nacelle of a wind turbine in Riemsloh probably caught fire after a lightning, the flames spread because the fire brigade cannot reach the fire at a height of 80 meters, according to the expert, according to the calculation principles of DIN EN62305 (VDE0185-305): 2006-10 a high lightning protection class will be created.

There is no reliable statistical data on the risk to locations in the open sea, such parks have only recently been realized in Germany. Research projects such as RAVE (Research at Alpha Ventus) in the first Alpha Ventus offshore park or the FINO platforms are intended to measure lightning frequencies and parameters for future offshore plants. Onshore wind turbines in the low mountain ranges have to struggle with lightning strikes, of the 405 wind turbines in the low mountain ranges that were recorded in the IWES wind monitor between 1992 and 2005, 497 reports of lightning damage came, 147 were direct hits.

This primarily affects the control unit, but also the body of the rotor blades and the aerodynamic brake, stopping the wind turbine by turning on the blades. “This is not surprising, as statistics show that 56 percent of the lightning hits a rotor blade,” explains Linder. This could even lead to melting at the rotor tips. On the other hand, receptors are now built into the leaf tips that specify defined impact points. The specific design varies depending on the manufacturer, from a copper braid on the tips to replaceable metal caps to conductive profiles in the sheet edges.

The derivative can also run within the rotor blade, over the blade surface or along the blade edges. In order to allow the lightning current to flow away in a controlled manner, the arresters are connected to the hub, where carbon fiber brushes or air spark gaps bridge the jump to the nacelle body.
The tower itself, as a conductor or embedded wire, leads the current to ground. The nacelle structures and the nacelle itself are additionally protected with interception rods or arrest cages. System voltages in wind turbines are increasing more and more.
However, internal lightning protection is just as important as external protection, especially since the system voltages of the wind turbines are increasing more and more. “The trend is towards 690 and 1,000 volts in TN systems in order to keep the cable cross-section small in large systems,” says the expert. “This means special requirements for the surge arrester, for example with regard to the structural design.

Attention must be paid to the air and creepage distances for these systems. “With wind turbines from 600 kilowatts to 2.5 megawatts, short-circuit currents of between eight and 30 kiloamperes occur when using spark gaps, which is why only spark gaps with high follow-up current extinguishing capacities can be used. Leutron therefore uses, for example, in the transition from lightning protection zone 0 to 1 in the main distribution at the base of the tower, a specially matched combination arrester for 400/690 volt systems with a lightning impulse current capacity of 50 kiloamperes per pole, which can also extinguish follow-up currents independently. In addition, Linder advises not only to use the lightning protection zone concept for wind turbines, but to combine it with the “central entry point” principle (CEP): “This means forming and implementing local protection islands.” All lines entering a zone become part of it installed at a central point where the surge protector is also installed. As a result, the systems within the zone are better protected against coupling and delayed potential differences.

At the same time, the costs for the arresters decrease and the maintenance effort is minimized. Internal lightning protection is particularly important insofar as it shields the electrical system not only against direct strikes, but also against overvoltage from lightning strikes in lines or interference from electromagnetic fields.