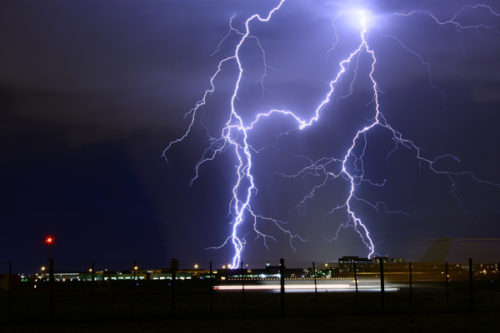 Almost two million lightning strikes in Germany every year. Not only is a direct hit dangerous, but also the long-range effect: In cities, computers and computer-controlled production facilities can still be destroyed 700 m from the discharge if the lightning is not intercepted and discharged. The solution presented here is intended to prevent this.

Systems of the central control technology in the company complex of Robert Bosch GmbH in Stuttgart-Feuerbach meticulously monitor the manufacturing processes. If a problem occurs somewhere in production, it is reported immediately. To ensure that this control center does not fall victim to a fault, the building was equipped with a new lightning and surge protection system in cooperation with the surge protection expert Leutron GmbH. The centerpiece is a new type of lightning arrestor that is hardly known in Germany.

No data loss due to lightning and overvoltage

In addition to research and development, Bosch in Stuttgart-Feuerbach mainly produces components for automotive technology. “Eventual fault messages also arrive in the central control system,” states Jochen Zowe, the responsible facility manager at Bosch, “If a breakdown occurred at this point, for example due to a lightning strike, production could continue, but the associated data would be lost. To prevent this from happening, the complex has long been equipped with a lightning protection system in accordance with the VDE standard, which has now been brought up to the latest state of the art. ”System 3000 is the solution from Leutron GmbH, based in Leinfelden-Echterdingen, which has a new type of lightning rod design from the American manufacturer Erico. This patented technology, developed by the company over many years of research, with thorough studies in field and laboratory tests, is based on the latest research findings and consists of a hemispherical safety gear, a surge arrester and a low-resistance earth electrode that acts as a magnet attracts and makes it harmless by the rapid forwarding into the ground.

The lightning is intercepted and destroyed

When a flash of lightning approaches the building, the voltage in the hemisphere increases due to the capacitive coupling until a controlled arc arises between the dome and the interception rod. This releases electrons on the one hand, and on the other hand increases the electric field above the structure. Both together ultimately create a catch discharge, which pulls the pilot lightning and the discharge itself and into the arrester. This coordination with the electrical field is the only way to ensure that a catch discharge occurs at the right time, which can couple with the pilot lightning.

Leutron uses the collection volume method to place the air-termination system, which, taking into account the electrical resistance of the air, the different strengths of the electrical field at various points in the building and any competing air volume, calculates the best location for optimal protection. The conventional flash ball method, which works with fixed flash distances for the calculation, is thereby significantly refined.

With the innovative system, Bosch plays the role of a pioneer in Germany, while lightning protection systems of this type have been in use in the thunderstorm-prone climate of Southeast Asia for some time. At a communication tower near Bandung in West Java, for example, 56 lightning strikes were intercepted without consequential damage within three years. In addition to the higher protective effect, the automotive supplier in Stuttgart also benefits from other advantages of the conversion. This resulted in a noticeable saving in costs and maintenance time. The decisive factor is that System 3000 only works with one arrester, which significantly reduces the time for checking the lightning protection installation.

Because this technology is different from what is common in Germany, the system is considered a pilot project. Bosch is accompanied by TÜV Süd in matters of safety and functionality.