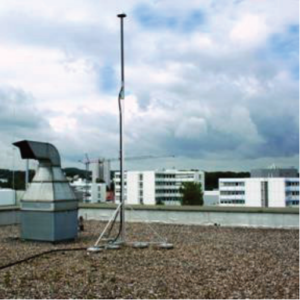 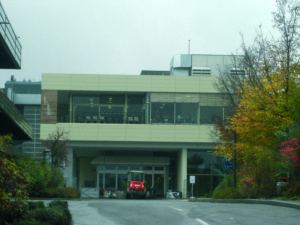 When construction is already underway, it is also visually appealing, the Fraunhofer Gesellschaft thought when it came to redesigning the Stuttgart Institute Center. The architecture of modern canteen construction, which is directly in the line of sight of the visitors, is dominated accordingly by large glass surfaces and wood. The problem, however, was that no lightning protection system should be visible on the building, it would have disturbed the overall concept too much. Without further ado, the engineers, in consultation with the client, outsourced the arrester to a higher neighboring building. This was made possible by an innovative lightning protection concept from the USA. The Stuttgart Institute Center (IZS) is the second largest research center of the Fraunhofer Gesellschaft in Germany. Six institutes are centrally located here, from industrial engineering to building physics and production technology to the technology development group. The newly built canteen of the IZS is the meeting point for researchers from all scientific disciplines. With huge glass surfaces, wooden elements and a wide balcony, it not only offers space for cozy breaks, but also acts as an open and inviting building for visitors to the center. Nothing should disturb this first impression, not even a lightning protection installation on the roof. In addition, there was a problem with the structural design: “Since the building is built on supports, with conventional lightning protection, the discharge line on the outside would have had to be lowered – a potential danger for passers-by,” said Rolf Rogg from the engineering office Schwarz in Stuttgart the electrical planning of the canteen was responsible. In addition, it was not clear in the planning phase whether the old canteen structure over which the new one was being built would not be demolished, which is why the existing necessary arresters and earthing devices could no longer be used and included in the planning.

If only to avoid damage to the building, the canteen had to be protected from lightning. The simple solution of the planners and engineers: The lightning protection for the canteen should come from a neighboring building.

For the unusual demands of the Fraunhofer Gesellschaft, a state-of-the-art Dynasphere System 3000 was used, a technology that is only used in a few but well-known buildings in Germany, such as the Arena auf Schalke or the new Porsche Museum in Stuttgart . The system from the American manufacturer Erico had previously proven its special catch effect in numerous laboratory and field tests as well as in practice in stormy Southeast Asia.

The system – unusual for a lightning rod – consists of a hemispherical safety gear that is installed on a mast. It is the heart of the system. An approaching downward flash causes the capacitive coupling across the hemisphere to increase the voltage in it, which is finally discharged in a controlled arc between the surface of the sphere and the electrode installed in it in isolation. A flash is fired by the strengthening of the electric field above the dome. The special structure ensures that the catch discharge occurs at the right time. This couples with the lightning and leads it through the high-voltage arrester cable to the earthing system.

However, the “attraction” of the safety gear alone would not have been enough to protect two buildings at the IZS at the same time. Positioning on the roof was equally important in order to make the best possible use of the catch volume. Leutron did not use the simple flash ball method, which assumes a fixed flash distance, but instead used the so-called Collection Volume Method (CVM), which takes into account the building height and geometry as well as physical criteria such as the resistance of the air and the intensity of the air electrical field at various points in the building structure. Using a specially developed CAD system, taking these factors into account, the best location could be determined using three-dimensional computer models. This resulted in a point on the main building next to the canteen. There was already an older, conventional lightning protection system, but it could easily be replaced by the Dynasphere System 3000.

In order not to injure the roof skin, the lightning rod construction was anchored to the roof with a tripod bracket. A powerful arrester cable leads from the interception system to an earthing system with low resistance, which means that the intercepted lightning can be safely controlled. The cable used, which has a dielectric strength of 250 kilovolts at the top connection, is an essential part of the lightning protection system. Thanks to its special design, the risk of flashover or breakdown is significantly reduced, even with very high lightning currents, and the necessary separation distance from the Erico arrester is almost zero. “This derivation made it possible to safely and quickly direct the lightning energy captured by the Dynasphere directly to the earthing system on the outer wall behind the sheet metal facade,” reports engineer Rogg. The appearance of the main building remained as undisturbed as the external impression of the newly built canteen.

The new system at the Fraunhofer Institute Center in Stuttgart did not yet have to prove itself in an emergency, in contrast to other locations such as the Bank of China, where more than 100 lightning bolts have been captured and safely derived since 1995.